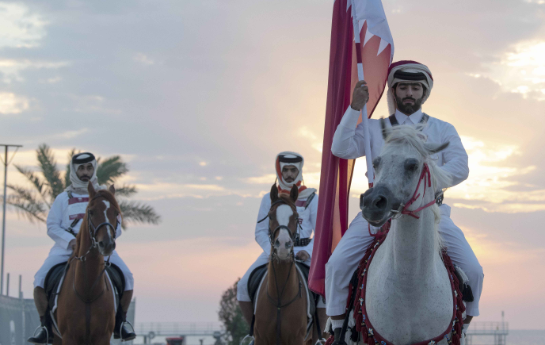 The Team Qatar flag relay is an annual event organized by the Qatar Olympic Committee. Held every year on the 2nd week of December, the event aims to unite, inspire and share pride within the community through the Team Qatar athletes. Past and present athletes, children, teachers and various members from different communities will have the opportunity to carry the Qatari Flag across various Qatari Landmarks such as Aspire Zone, Qatar Foundation, the Corniche, the Pearl, Katara etc.

The Team Qatar flag relay was first held in 2017 and the flag was transported through various locations through a wide range of sporting activities like cycling, rowing, running, swimming, sailing, flying etc. 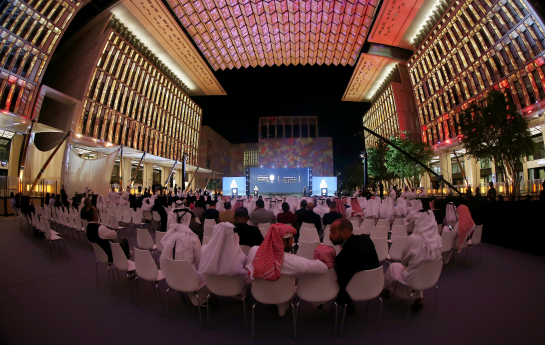 The Sports Excellence Day is an annual event organized by the Qatar Olympic Committee to celebrate Team Qatar’s athletes, coaches and sporting institutions on their achievements for the year. This award ceremony is held in recognition of the distinguished individuals who have made achievements for Qatari sport and succeeded in raising the Qatari flag in the various tournaments where they represented Qatar, in addition to their success in translating the vision of the QOC. This event was first held in 2008 and has been held annually ever since.

In the 2019 edition of the excellence day the notable winners were Mutaz Barshim who secured gold in the IAAF World Athletics Championships Doha 2019 and also the Qatar National Football team which won the AFC Asian Cup in 2019.

The Sports Excellence day also gives out an administration award, which is handed over to the institution that shows continuous support for the Olympic movement, and plays key role in developing new talent in Qatar. 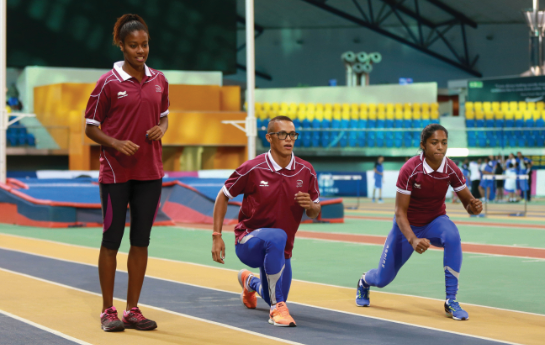 Shine is the QOC’s Rio 2016 Olympic legacy project. It was established to provide an opportunity for underprivileged young athletes from across Rio de Janeiro to train at Qatar’s world-class facilities at the Aspire Academy, with specialised coaching and sports science support.

Ten aspiring athletes won a place in the training camp at the Aspire Academy following an athletics competition held in Rio de Janeiro for almost 200 of the city’s most talented young athletes. For many of the athletes, it was the first time they had left Brazil or travelled on an airplane. This program enabled the young athletes to experience a new region and culture, in addition to their sporting experiences. During the week-long training camp,  the athletes received coaching, sports science testing and analysis, lectures and guidance from the Academy’s world-leading staff, all in support of their journeys to becoming Brazil’s future Olympic heroes.

In order to create a further legacy from Shine, the QOC donated all proceeds from public entry fees to Bayt Qatar, its Rio 2016 Olympic hospitality house, to Futuro Olimpico. The donations enabled the NGO to buy equipment and uniforms, meaning that further young athletes were able to benefit from the transformational power of sport. 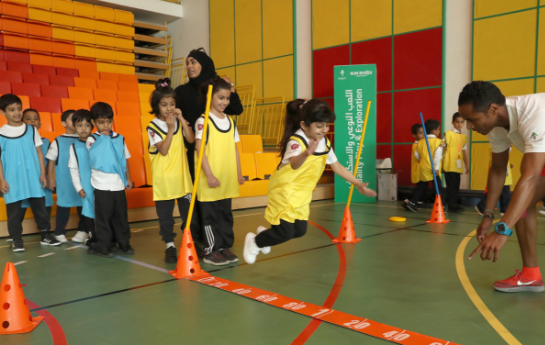 ‘Be an Athlete’ is Qatar’s unique Athlete Development Pathway (ADP) model that seeks to produce a new generation of Qatari sporting champions. ADP is the outcome of a three-year project led by QOC in partnership with Aspire Academy, involving input of multiple stakeholders, sporting entities and world-class sport development experts to create a framework unique for Qatar.

The ADP is a robust framework that will enable Qatar to be fully unified in its approach to identifying, developing and nurturing talented athletes at every stage of their career, from early childhood to post-retirement, enabling them to reach their full potential. It is the first of its kind in the MENA region and is another example of how Qatar is always striving to break new ground in the development of sport at every level.

The framework includes 39 sport specific models, each tailored to enable optimum development within different sports and disciplines, including para-sport and women in sport. It will be rolled out with an innovative Athlete Management System that centralises data gathering of all athletes, including sport science data, learning progress and injury history. This will enable insights into athletes’ training to be gathered, which will also help to shape and improve future training programmes.

Following the completion of the ADP in November 2016, the QOC is currently in the process of rolling out its delivery. The QOC is working closely with and supporting its national federations at every stage, and regularly monitoring and reviewing progress. An in depth ADP encyclopedia has been produced to support its delivery, which includes background information, guidelines, processes and techniques. 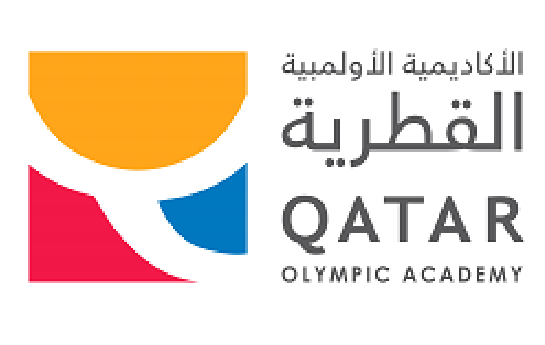 Founded in 2006, Qatar Olympic Academy (QOA) is a member of the International Olympic Academy. QOA is the first academy in the MENA region to offer professional educational programs related to sports. The QOA’s ultimate goal is to become a leading academy for sports and Olympic education locally, regionally, and internationally.

In October 2014, the Olympic Council of Asia (OCA) signed an agreement with QOA to enable the Academy to provide academic and technical training sessions for coaches, referees, specialists and technicians from across Asia. The agreement also provides the opportunity for Asian athletes to train at QOA and its affiliated world-class facilities.

The QOA offers certificate programs with an e-learning component in Sports Management, Arabic Coaching and Olympic Values and aims to build the first Arabic-specific sports and Olympic think-tank; the QOA Research Centre. 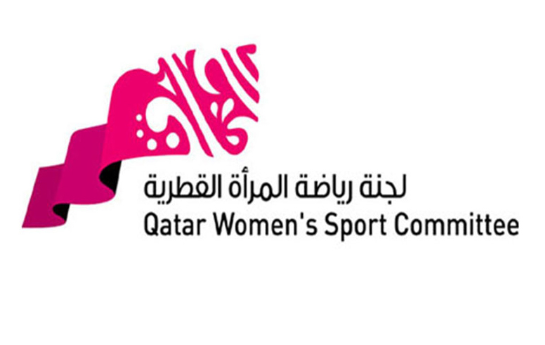 The Qatar Women's Sports Committee (QWSC) was established in 2001 and was a major milestone in women's sports movement in Qatar. It heralded the opening of several women’s sports centres where women's sporting talent can be discovered and developed under the guidance of specialist coaches in all fields of sport.

The QWSC seeks to improve women’s performance in sports, enhance their participation in sports events, sessions and conferences either at home or abroad and improve their administrative and technical capacities in this respect, in addition to creating a general awareness of the importance of sports activities.

The QWSC has considerably advanced Qatari women's participation and performance in a range of sports over the years, and ensured that Qatar was represented by a team of female athletes at the London 2012 Olympic Games. In 2013, President of the QWSC, Ahlam Salem Mubarak Al Mana, was presented by the IOC’s World Trophy at the IOC Women and Sport Awards for her contribution to the development of women’s participation in sports and sports administration. 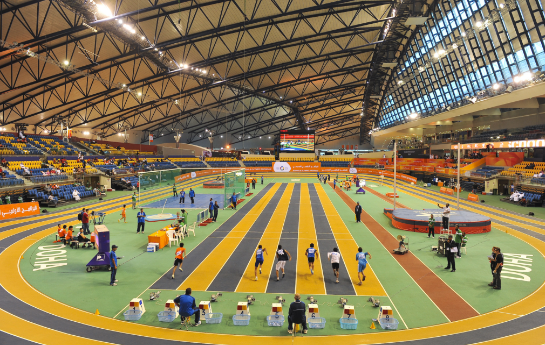 The Schools Olympic Program (SOP) is a core component of Qatar’s commitment to developing sport at a grassroots level. It aims to increase sports participation among young people and educate them through the Olympic values, contributing to a healthy and cohesive society. It also aims to be the first stepping stone to producing successful world-class athletes and the Qatar Olympic Committee works in partnership with its national federations to identify talented athletes who have the potential to represent Qatar on the world-stage.

The program was founded in 2007 as a legacy from the Doha 2006 Asian Games and has just concluded its ninth edition. It has grown from 7,099 participants in its inaugural season to 26,454 students from 461 schools participating in the last school year. Students compete across 14 sports, including para-sports, throughout the school year, all striving to qualify for the grand finals every March. The program has become a beacon for sports development in the region, with other nations adopting a similar model in their own schools. 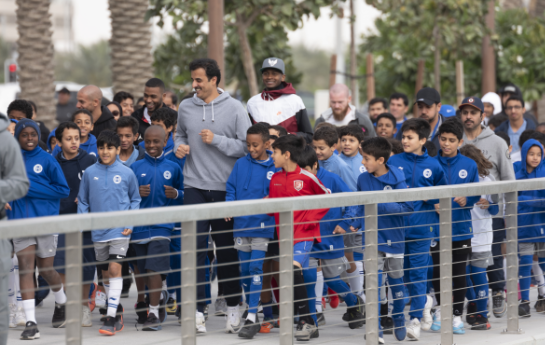 The Qatar National Sport Day (NSD) is celebrated every second Tuesday of February, and is an initiative adopted after a 2011 decree by H.H. the Emir Sheikh Tamim bin Hamad Al Thani. The inaugural NSD was held in 2012 and has been held annually ever since.

The State of Qatar is one of the only countries in the world that organises a National Sport Day through a paid day of leave and it is aimed at embedding sporting values into Qatar’s culture and inspiring local people to participate in sports. Various public and private entities organise different sporting activities for every age and fitness level.

The main objective of National Sport Day is to make sport an integral part of everyday life by encouraging the whole nation to take part in sport regularly, contributing to the development of a healthy society and raising awareness of the importance of sport and physical activity at every level of society.